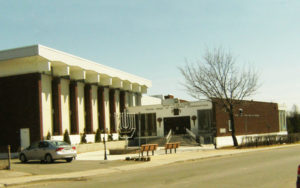 The present social hall was then built. It served as a sanctuary, social hall and on Sunday afternoons as a floor hockey rink, By moving around chairs we were able to have services Sabbath morning and a bar mitzvah luncheon afterwards. The tables were set and stacked in a corner. When services were over the guests of the bar mitzvah were asked to adjourn to the lobby. The waiters then placed the chairs and table restaurant style and the guests returned to the social hall.
Finally our beautiful sanctuary was built and the Young Israel was on its way to becoming a major synagogue of the Montreal area. The arrangement of the social hall next to the sanctuary was very convenient and in our heyday, during the 70 ‘s and the beginning of the 80 ‘s, we had bar mitzvah luncheons, mincha bar mitzvahs and Sunday weddings, all on the same weekend.